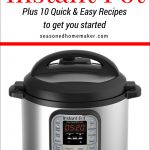 Inside: Everything You Need to Know About the Instant Pot Pressure Cooker

At first I was a little skeptical until my Crock Pot boiled over into my kitchen cabinets and drawers. That messy incident caused me to take a chance on the Instant Pot. It was kitchen appliance love at first site.

I’m Going to Answer All of Your Instant Pot Questions

The Instant Pot is actually the brand name for a programmable countertop multi-cooker. A what? To be specific ~ a single countertop appliance capable of performing multiple functions. It, essentially, replaces the following:

This single appliance has literally changed the way I cook. Most days I use the Slow Cooker or Pressure Cooker features. Because of this, I spend less time in my kitchen and more time doing the things I love.

My grocery basket is now filled with vegetables because the IP perfectly cooks them and doesn’t destroy the nutrients. Once a week I cook up a batch of hard boiled egg for quick breakfasts. I no longer buy store-bought yogurt because it’s so easy to make my own.

The saute/browning feature means I can saute veggies and brown meat in a single pot before setting the slow cooker.

I occasionally toss things in the pot and set the Warming feature. It will warm up your food and then keep it warm for hours. You could put frozen soup into the pot in the morning, set it on Warm, and have perfectly heated soup for dinner ten hours later.

I bet you’re wondering why I would want a pressure cooker. Don’t they occasionally explode and leave sweet potatoes on the ceiling?

Well, this is a not your grandmother’s pressure cooker. It has numerous built-in safety features that are electronically controlled. It is impossible to open the lid until the the pressure has been released ~ either naturally or manually.

There are Several Instant Pot Models

Instant Pot Recipes I Use All the Time