The other day I was missing my friend Gin who is from India. She and her husband had been our neighbors and friends. Alas, we live in a mobile society and her husband’s work took them to a new state.

Many Indian recipes are either gluten-free or easily converted to gluten-free. My Crock Pot Chicken Tikka Masala also happens to also be semi-Paleo. So, it works for more than one restricted diet. I also think it would be great for guests, too.

If you’ve never had Indian food, then this is the dish to try. It’s almost guaranteed to be on every Indian restaurant’s menu. The ingredients are easy to gather and {my favorite part} it has this rich, creamy tomato sauce blended among the spicy flavors. Deeee-lish-ussss!

This recipe is semi-Paleo because I soaked my chicken in yogurt {thank you Gin for that tip!} prior to putting it in the Crock Pot. If you want it to be true Paleo, skip the yogurt soaking. 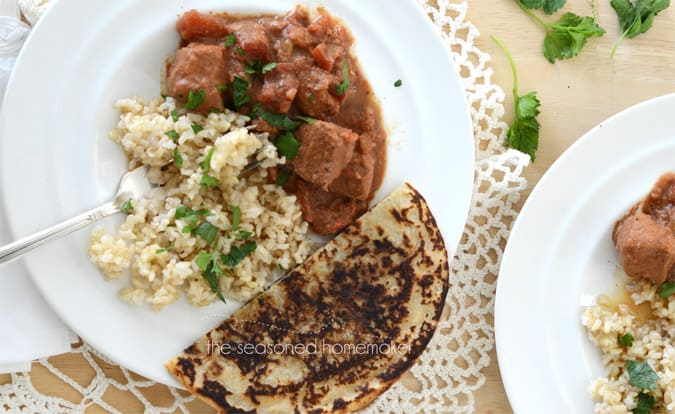 While this recipe is designed for a slow cooker, you can certainly make it on the stove top, too. I would recommend a cast iron dutch oven like a Le Creuset. Perfect for browning the onions, spices, and meat before adding the sauce ingredients.

Print
Gluten-Free Naan
Author: Leslie
Ingredients
Instructions
Notes
Slightly adapted from MyHeartBeets.com
3.5.3208
Typical Naan is NOT gluten-free, but this recipe happens to be GF and it’s so easy to make. I’m including the recipe below. The secret here is to let the Naan steam a little. Otherwise, it becomes gluey because of the tapioca starch. This recipe is considered Paleo, however, I think that the absence of rice flour makes it cook better than a typical gluten-free recipe. 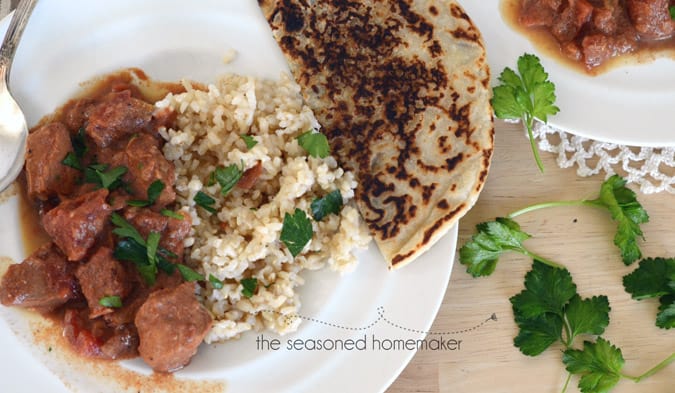 Some of the ingredients for the Naan might not be available at regular grocery stores so I’ve included an affiliate list so you can search for them in your area.

Welcome, I’m Leslie. Here at The Seasoned Homemaker every day can be extraordinary when we Celebrate Creativity together! To read more, click here.