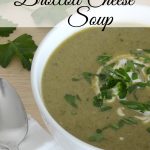 Inside: Healthy Broccoli Cheese Soup in a Pot

I have a recipe to share with you. (Healthy Broccoli Cheese Soup in a Pot) It came about because I fell in love with a pot. Not any pot, but a new-fangled pressure cooker. I got this pot because a few weeks back I was making broth in my slow cooker and it boiled over.

Why I broke up with my Crock Pot

I was minding my own business, sitting in my office when I heard this sizzle-y sound coming from the kitchen. When I turned the corner into my kitchen I saw that the broth had boiled over in my slow cooker. As in, boiled over and out of the crockpot, into a drawer, into a cabinet, and onto the floor. The crock pot wasn’t even close to full, and, for the life of me, I have no idea why a slow cooker set on low could possibly boil over. But it did. #nomorecrockpotforme

So, I’ve permanently broken up with my slow cooker and replaced it with my new cooking love. It’s called the Instant Pot 7-in-1 Pressure Cooker. Just look at this beauty. All sorts of settings, including yogurt!  {There is even a tempered glass lid that can be purchased. This is what I use for the slow cooker feature}

I bet you’re wondering why I would want a pressure cooker. Don’t they occasionally explode and leave sweet potatoes on the ceiling? Well, this is a not your mother’s pressure cooker. It has 10 built-in safety features that are electronically controlled. It is impossible to open the lid until the machine reads that the pressure has been released.

Back to the Soup Recipe

Like I said, I’m in love with a pot. Below is one of the first recipes I made in my super awesome pressure cooker. My soup was done in about 30 minutes. That means I can work all day long and still have a nutritious dinner on the table by six ~ even if I start dinner at 5:30!

One of my favorite soups is Broccoli Cheese Soup. But, I don’t really like some of the ingredients: heavy cream + cheese + { burp} + broccoli = Too Rich For Moi! Until I found this Cooks Illustrated recipe which has all of the flavor but none of the cream. And, it has the addition of spinach which makes it super healthy, but not super rich.

This recipe can easily be made on the stove, but it also works great in the Instant Pot! The Instant Pot has a Saute setting which means I can melt the butter and saute the veggies before adding the liquids. #ilovethispot #reallyreallylovethispot

When simmered on the stove, the soup thickens nicely. When cooked in the Instant Pot it can be a little thin. All I did to counter-act this was add some arrowroot powder (blended with broth) to the Simmer function on the Instant Pot and it thickened in about 3 minutes.

Enjoy, whether on the stove, slow cooker, or and Instant Pot Pressure Cooker.

This recipe is adapted from Cook’s Illustrated, March/April 2011

Pin this image for later: