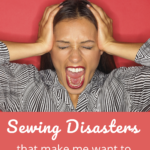 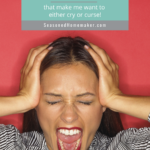 Warning: There will be snarky and sarcastic remarks below.

Sewing Disasters that make me want to either cry or curse. Otherwise known as UFO’s. You know the kind that make you wish you had never taken up sewing. The kind of sewing disaster that causes you to lose your religion. That’s what I’m talking about.

Question:  When do we throw in the towel and call a sewing project a massive F-A-I-L?

I was doing so well sewing this Ottobre top. I have even gone on to make more, bringing my total Ottobre top count to be three. More on that below.

I guess I was feeling a little confident in the fact that I could whip up a couple of tops that fit nicely and look good enough to wear in public. Maybe I will try something new.

You know, it always starts with a piece of fabric. And I had this pretty piece of teal lawn that wasn’t too transparent and would make a nice top. I wanted something loose and breezy and I didn’t think a solid would work on my go-to Ottobre top.

So, I found this pattern. I love the pin tucks which give it texture and make it a little roomy. A perfect top for seasonal transitions here in Texas. Plus I could wear it to church and no one would see my rapidly developing farmer’s tan.

The top I want to  discuss today is one that I cannot get to work. I have made, remade, unpicked, and resewn the muslin so many times. I mean, look at the pattern. It isn’t that difficult. I’ve done pin tucks before and princess seams. I cannot even tell you when it started to go wrong.

First, I did a full bust adjustment. I’ve done them before and had great success. I googled how to do a FBA with princess seams. OK, Got it. When I made my first muslin it was still a little tight through the bust and arms. I readjusted. I also made the necessary pattern adjustments in the shoulders and overall length of the garment. I’ve done this hundreds of times with most of them being a success.

So, why this top? Where did I make a wrong turn? When is it time to just say this one ain’t gonna work and then move on? Apparently, I am slow to learn. I went back and tried a second time. At this point I am now starting to believe in an undiscovered psydrome that I just invented called sewing psychosis.

In order to avoid therapy for sewing psychosis, I pulled out my Ottobre pattern and some pretty pink voile I had recently purchased and two hours later I had made this top. There really wasn’t much to it. It turned out perfectly and I love the fit. Must’ve been designed by angels because making this top restored my sewing mojo. Plus, I still have the pretty teal lawn waiting to find it’s perfect pattern mate.

I know I have a long way to go where pattern fitting is concerned. But the devil pattern didn’t seem that difficult and the style appeared to be pretty forgiving. Isn’t that just like the devil. He lures you in with confidence and then bashes you so hard you turn into the Swearing Sewist.

New question: Do you have any patterns that were designed by the devil? Have you ever been turned inside out by a sewing pattern? Do tell ~ so we can commiserate and cry in our thimbles.