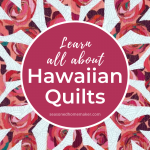 Inside: How to Make a Hawaiian Quilt

Welcome Shannon Brinkley to the site today. Today she is sharing a little about Hawaiian Quilts and how you can be a part of this amazing tradition!

Each month in my online quilt guild, Meander, we explore a different quilt-making style. In month one, we kicked things off by traveling to Hawaii and learning all about Hawaiian applique!

We had fun making our Hawaiian Quilt projects — we explored how to make them traditionally by hand, by machine, raw-edge, and even a few with some couching!

We learned how to design our own templates, and it was amazing seeing so many members stepping outside of their comfort zone and designing their own applique piece!

I wanted to share with you a bit about what we discovered and explored!

The Hawaiian Islands are the most remote set of islands on earth, situated right in the middle of the Pacific Ocean, they are believed to have been first settled around 400 AD by Polynesians sailers. Hawaii remained mostly isolated from the outside world until Captain James Cook landed there in 1778.

In the 1820s New England missionaries came to the islands and maintained schools for much of the 19th century.

In America at the time, applique medallion quilts were very popular, and it is believed that the missionaries shared the craft of quilt making with the Islanders, though they had been working with cloth long before the missionaries arrived.

By the 1870s, the Hawaiians had developed a very unique and distinctive quilting style. Typically only two fabrics were used, one brightly colored fabric for the large applique piece and a white or cream fabric (usually made from a bedsheet) was used for the background.

Hawaii being so isolated, fabric was hard to come by, so their palettes remained quite simple. The applique piece fills the entire quilt top and is cut from a single piece of fabric similarly to how you’d cut out a paper snowflake.

This method of paper cutting was popular with Pennsylvania Germans and was often framed and given as gifts, so it is possible this inspired the Hawaiians, though origins of this unique style are still unclear.

What is clear is that the Hawaiians were inspired by the gorgeous flora around them as the motifs were typically of flowers, trees, and leaves. It is not surprising that the same paradise that draws travelers from all over the world inspired these remarkable and unique quilts.

Here are a few of the incredible projects some of the Meander Guild members made!

Here are a few of the incredible projects some of the Meander Guild members made!

How incredible is it that hundreds of years ago in the center of the Pacific Ocean, a group of women began folding large pieces of fabric into wedges, and cut out leaves and flowers, trying to capture the beauty surrounding them. Unfolding those wedges revealed striking designs that are as stunning and relevant today as they were in the 18th century.

Let’s carry on what these women started, and add our own twist to it.

If exploring a new quilt-making style each month sounds interesting to you, I’d love for you to join us in Meander. Learn more here.