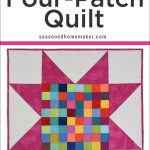 In the world of quilting, the four-patch beginner quilt block is easily the most versatile patchwork block.

Whenever I attend a local quilt guild or wander through a quilt show there are beautiful quilts crafted by skillful hands. I recognize that my quilting skills can’t compare to the level it takes to master many of these advanced designs.

This dilemma hasn’t stopped me in my quilting pursuits. Instead, I know that taking quilting baby steps will one day allow me to gain the experience to create my own masterpieces. And, I believe the same is true for you.

Quilting fun begins when you master quilt block fundamentals, and the Mother-of-Them-All is the 4-Patch Beginner quilt block. In the world of patchwork quilting, it’s one of those iconic blocks that has been deconstructed and reworked into a multitude of quilt designs. At its core, it’s still four same-sized blocks pieced in the exact same manner.

Look at the design below. Can you see all of the 4-patch blocks?

Like the 9-Patch Quilt Block, the 4-patch quilt block has been around for a long time and has a personality of its own. You will have to travel back to an earlier time in our nation when quilting was a necessity for survival. Women knew they had to make use of every scrap of fabric. If they continuously added bits and scraps to a quilt it would quickly become unwieldy, making it difficult to handle due to its growing size.

Enter the quilt block. Early quilters soon realized that they could break down their fabric pieces into simple geometric shapes, such as squares, then slowly piece them back together to form a quilt top. And that’s how the simple 4-patch quilt block came into being.

While this short history lesson gives you a brief understanding of the 4-patch quilt block’s origins, it by no means tells the entire story. This block’s simple design makes almost any fabric stand out and come to life. It can be deconstructed and reimagined so many different ways; however, for the sake of simplicity, I’m sticking with the basics. Some time into the future I will likely refer back to this post when I’m telling the story of another quilt block.

What’s So Great About the Four-Patch Block?

The Four-Patch Quilt Block is ideal for mastering simple piecing techniques. At its core, you are connecting four equally-sized squares to form one block. I’m using 2.5″ squares below to demonstrate.

It gets interesting when you keep expanding. Below, I chain-pieced all of my squares and then turned them into small 4-patch blocks.

Next, I connected all of these smaller four-patch blocks to create one medium block and then repeated this four more times.

Lastly, I  connected all of the medium 4-patch blocks to create one giant block which I will use in the center of a wall hanging.

An Easier Way to Piece

For the sake of this tutorial, I pieced all of these 2.5″ blocks using the chain piecing method. You can see from the photos that it’s not that uniform; however, once it’s all quilted that will likely disappear.

There is an easier way to create a four-patch block using strip piecing. This tutorial demonstrates how to strip piece a block.

Once you’ve mastered the basic concepts of a four-patch quilt block, you can deconstruct it and add variety to a quilt. This first block demonstrates how a block looks if you use two different fabrics in each of the individual blocks. By turning the blocks before attaching, you will get an entirely different look. This technique is sometimes called Disappearing 4-Patch.

To get an entirely different look, break down the block into three or four strips per block. Once they are rearranged, it barely resembles a four-patch block.

In spite of its simplicity, the 4-patch quilt block shows us how it’s done. This quilting dynamo has the ability to be changed dozens of different ways when paired with different blocks.

The four-patch quilt block is so versatile, and can literally create dozens of unique designs. It’s ideal for making almost any fabric stand out and come to life. It has the ability to be deconstructed and reimagined so many different ways.

Best of all, it’s about as simple as it gets and that means the possibilities are endless.