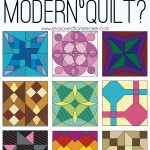 Lately, I’ve been pondering this question: What Defines a Modern Quilt? What do all modern quilts have in common? What makes them modern vs. traditional.

If I’m going to categorize myself as a Modern Quilter I ought to know the exact meaning of the term before I set out sewing up a bunch of quilts that don’t meet the requirements. Right?

I am officially a member of The Modern Quilt Guild and this is their definition of a modern quilt.

Modern quilts are primarily functional and inspired by modern design. Modern quilters work in different styles and define modern quilting in different ways, but several characteristics often appear which may help identify a modern quilt. These include, but are not limited to: the use of bold colors and prints, high contrast and graphic areas of solid color, improvisational piecing, minimalism, expansive negative space, and alternate grid work. “Modern traditionalism” or the updating of classic quilt designs is also often seen in modern quilting.

Hmmm. I look at the quilt I made from my QuiltCon class and I would want to call it Modern, but where is that seen?

I think two things that make quilts completely fit the modern genre are minimalism and negative space. Minimalism meaning less is more and negative space defined as solid colors where the quilting forms part of the design. This quilt is called Atmosphere and was created by Leanne from the Edmonton MQG.

I am drawn to this quilt because of its minimalism. That is one of the beauties of modern quilt design. Less truly becomes more.

The negative space also causes me to take notice of the actual quilting. At QuiltCon I attended a class taught by Angela Walters and she talked about how quilting in the negative spaces can enhance the overall quilt design. You can learn more from her Craftsy Classes. (affiliate)

An aspect of modern quilting that isn’t listed, but definitely fits the aesthetic is the reinterpretation of traditional quilt blocks. A perfect example is this quilt called Ohio Supernova by Heather Jones.

Notice all of the quilting in the negative space. It completely complements the quilt. If you think about a traditional Ohio star quilt there would be rows and columns of block repetition.

Most modern quilts eschew any type of sashing, but I love how this quilt’s border recreates the sashing effect. In my opinion this quilt reaches into the past to give us a modern interpretation.

Of course, the modern design of the machine quilting is what finishes this quilt and makes it truly modern (in my opinion).

The one area of modern quilting that I have yet to define would be Improvisational Piecing ~ which loosely means piecing together fabric without a set block design. Otherwise known as winging it.

Below is a short Craftsy video that shows Jacquie Gering creating a improvisational quilt square. She also has a Craftsy class on the subject if you want to know more about the subject.

A few other aspects of modern quilts would be modern fabrics, asymmetry, and pixelated designs.

Modern fabrics are a simple way to create modern design. This collection called Architextures by Carolyn Friedlander is a perfect example of a modern, graphic-styled fabric. Try making a traditional Ohio Star quilt from modern fabrics like these and your traditional quilt suddenly becomes modern.

Another category that can define a modern quilt is asymmetrical design ~ meaning most of the design is to one side and is not even squares or blocks. Technically, my quilt above would qualify under that definition. I think that this free Asymmetrical Diamond pattern from Robert Kaufman is a better example.

If you think about it, all of those blue stripes and plaids would be right at home in a more traditional-styled quilt. Instead, the asymmetrical design makes it more modern.

The last category that exemplifies a modern quilt would be pixelated designs. This is so unique to the digital age, yet it completely relies on traditional piecing.

There is an easy way to create a pixelated design. YouPatch is a pixelating service that will take your design and pixelate it. Then all you have to do is cut out the pieces and put them together. Easy peasy. They even have a design with scissors.

I think this quilt says it all.

And that, my friends, is my take on modern quilting. Please let me know what I’ve missed. If you want to see more modern quilts, visit the Modern Quilt Guild’s Online Gallery.

I don’t think I’ve even come close to fully defining a movement that is still evolving. Follow my Pinterest Quilting Board to see how I define Modern Quilting.