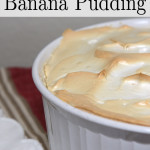 How would you like an All-American dessert? Let’s talk pudding ~ specifically Banana Pudding ~ particularly Gluten-Free Banana Pudding. Which, hands-down, is my favorite dessert.

Even though this particular version of Banana Pudding doesn’t call for vanilla wafers I have found a brand of gluten-free vanilla wafers that will work perfectly in this recipe. They are called Kinnikinnick Vanilla Wafers and they taste like the real deal.

When I entertained the idea of making my own vanilla wafers I realized that I would spend an entire day making a dessert that would be inhaled in under one minute.

Instead, I thought I’d try it sans vanilla wafers and instead put it in a mason jar, add loads of bananas, and top it with a beautiful meringue.

Of course, you can make it the traditional way with the gluten-free vanilla wafers. I have the instructions below. I just wanted to show you another option.

I have some strong opinions about Banana Pudding. Like, the pudding must be made on the stove. It most definitely does NOT come from a box on the Jello aisle. The pudding must also be a vanilla cream pudding and NOT banana flavored – that’s why the bananas are there.

The vanilla pudding is thickened with egg yolks, preferably from a chicken you know on a first name basis.

There must be an equal balance of bananas and pudding in the jar. This is very important.

The topping absolutely must be meringue – not whipped cream. Light, airy, and fluffy on the inside with a slight crispness on the outside and a hint of caramel-y flavor. I will not budge on this.

Don’t worry, I am going to give you my Mama’s secret for perfect meringue – it has never failed me.

I’m also tossing in the other option for making GF Banana Pudding using the Kinnikinnick Vanilla Wafers. Follow the Banana Pudding recipe above until it’s time to add the bananas to jars. Instead, add a layer of vanilla wafers to the bottom of an 8 x 8 baking dish. I use a larger corning ware bowl ~ almost anything average size will work.