One of the benefits of living in Austin is having a really amazing sewing store called Sew Much More.  Last week they had a special event showcasing What’s New in the Sewing World. The presidents of Babylock and Bernina were there along with their newest machines.

I need to warn you a little here. While I love the latest and greatest in gadgets, I just wasn’t that impressed. Anyway, I thought I’d give you a fair look at what I saw. And, I apologize for the really bad phone and stock photos. I didn’t want to lug around the dslr camera in case I got to test drive something.

First up with What’s New in the Sewing World has to do with machine embroidery ~ something which I have shared on in the past.

Did you know that Bernina now has a multi-needle embroidery machine? Me either! Bernina says it’s perfect for the dedicated hobbyist or {cottage business} entrepreneur. I didn’t get the cost because I didn’t see the point. I’m never owning one of these unless I decide to get into the business of embroidering for small businesses. You know, team caps and t-shirts. That sort of thing.

However, a small business embroidering can provide a nice second income for a family. That said ~ if you want to start a small embroidering business then you might want to look at this machine. It has 16 needles which out-needles the competition. And being a Bernina I’m willing to guess that it is top-of-the-line. 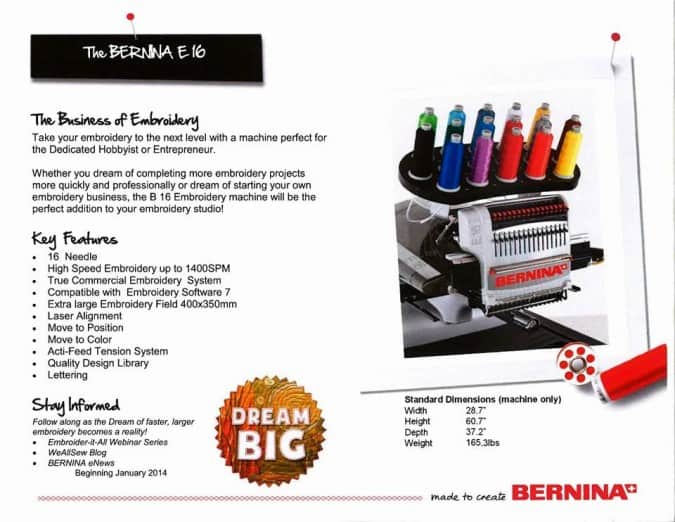 Bernina also brought along it’s new long arm quilting machine. Again, it’s pretty safe to say that I will never own this machine, but this might be a great machine to own if you want to start a long arm quilting business.

One of the features of the machine is the built in stitch regulation that regulates the individual stitches and keeps them a consistent stitch length. Because I attend Quilt Market every year I have seen what the top of the line long arm quilt machines can do. This one is right up there with some of the more professional machines. Totally worth a look if you’re looking. 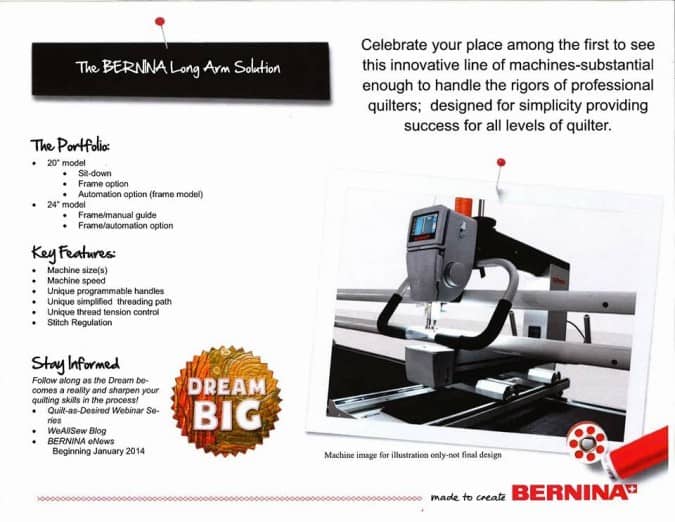 In the sewing machine area there were two high-end sewing machine demonstrations ~ the Bernina 880 and the Babylock Destiny. Honestly, I wasn’t overly impressed with either machine. There are so many bells and whistles on these machines that it was hard to see the point. At the end of the day all I really need is a machine where the needle consistently goes up and down across a piece of fabric.

Neither of the demonstrations showed the sewing machine sewing! Really? What’s the point in having a sewing machine that retails for more than the combined value of both of our cars and not show me how well it sews? Show.me.the.sewing.

Anyway, rant aside, this is what’s new in the sewing world. I’ll start with the Bernina 880. I never got to see the machine sew. There was a demonstration on how well it could draw. Yep, I said draw ~ as in ~ there was a fabric pen attached to the machine and it was spitting out an embroidery design ~ only it wasn’t stitching the design it was drawing the design.

I have to say I was intrigued but at the end of the day if I want to print something on fabric I will probably just cut out a stencil on the Silhouette and get some craft store paint. 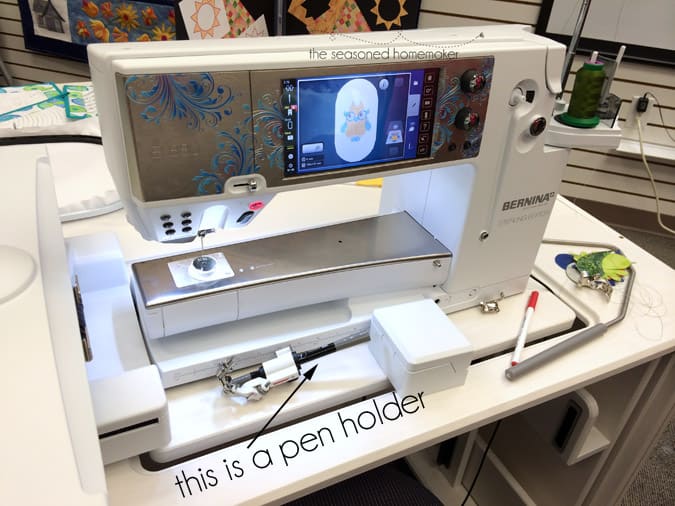 I got to see the sewing machine sketch out this cute owl design. It wasn’t particularly fast but it was particularly adorable. It is a pretty well-know fact among people who know me well that I am a sucker for gadgets every time. But this one didn’t grab me at all. I really don’t think I need to draw with my sewing machine. I would’ve preferred to see someone show me how to quilt with this machine. That would’ve grabbed me and possibly caused me to decrease any chance of us having a future retirement income. 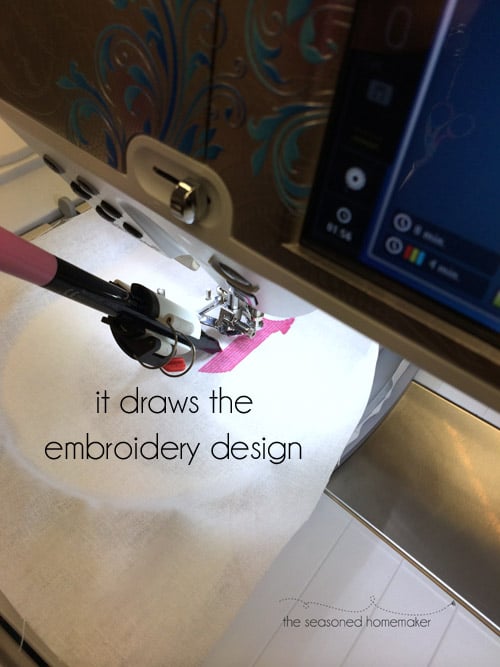 This cute towel was something they did before I arrived. It’s really cute and I really would love to make a towel like that. The machine also has the ability to add embroidery embellishment with the drawing. But I’m not sure that drawing it on my sewing machine would really inspire me that much ~ even with the ability to mix in machine embroidery.

Over in the Babylock section they were demonstrating the brand spankin’ new Destiny.

Again, no sewing was being demonstrated. Instead they were scanning in a design then digitizing the design. At some point the digitized design was going to get stitched out, but I lost interest after 15 minutes of scanning and digitizing.

That flat not-embroidery hoop is where you place your to-be-scanned picture or fabric. The machine goes back and forth until the entire design is scanned into the machine’s computer.

While very impressive, it took a long time to scan in the design. I could’ve done this on my computer and loaded it onto a flash drive much faster since the machine has a place to upload designs.

The machine also has a whole lot of on-screen editing features. For some, the ability to edit a design on the screen could be a huge selling factor. But this just doesn’t do it for me. Isn’t that the point of editing software anyway. I’m sure if I owned a machine that did this I would use it, but I don’t think I would purchase a machine because it has these abilities.

What really would’ve caused me to take notice was something like an oversized bobbin ~ which both of these machines have. Why they weren’t showing me their bobbins is still a mystery? Isn’t that what every sewist wants ~ a bobbin the size of a Michelin tire. 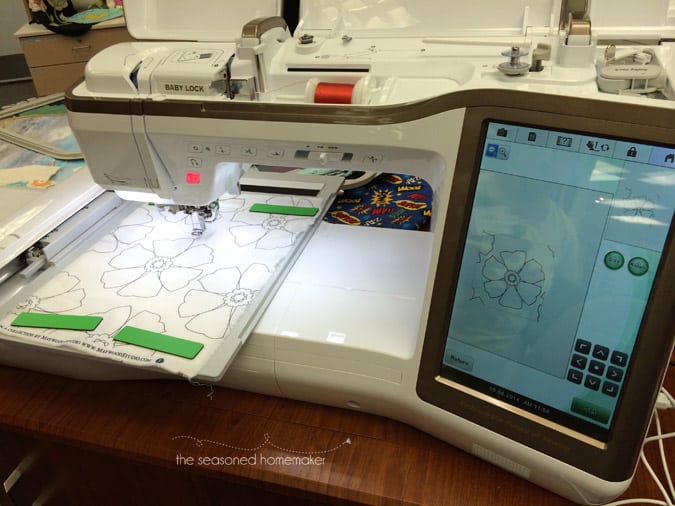 And that brings me to the point here. I would love a machine that has a really big sewing area and one with the biggest bobbin you’ve ever seen. I like sewing with electronic machines, but I am overwhelmed with all of these features that don’t really improve my sewing. As a matter of fact, I think they would probably overshadow my creativity.

I love to sew. It’s been a part of me since my early childhood. And, I love technology and progress. And, I know that both Babylock and Bernina listen to their customers and work hard to give their customers what they want. What I would like to have done was sit behind these fabulous machines and feel how it sews.

Which brings me to the point here ~ it doesn’t take a fancy schmancy sewing machine for you to find your sewing soul. But it certainly doesn’t hurt! 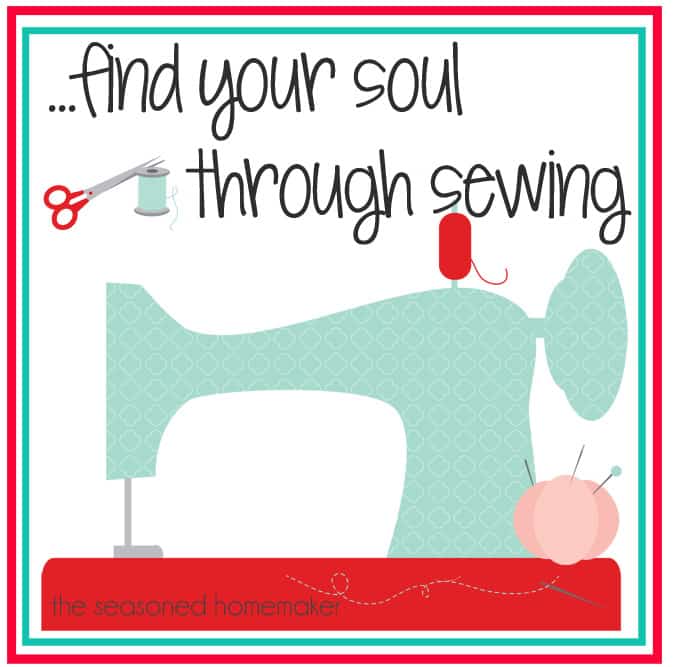 And just for the record, if I EVER got the chance to own either of these machines I’d be all over it. ‘Cuz bottom line, I’d still love all of those bells and whistles.

« How to Sew Leggings – Plus a Top
Free Motion Applique »