You know that Ikea commercial showing a couple living at Ikea. I’ve been to Ikea so many times that I feel like I should bring a toothbrush and pj’s because I will back in the morning.

Well, it’s starting to pay off because I really feel like I am making Sewing Room Progress with this whole move thing.

Remember when my sewing room looked like this right after the move {but before getting stuff like fabric out of storage}. I thought I had it under control. Totally manageable. 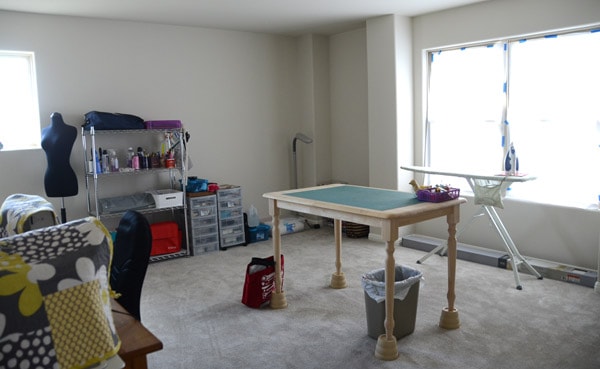 I had really forgotten how much sewing stuff I had in storage. After work everyday Mr. Seasoned Homemaker would make a run to the storage unit (when it wasn’t raining) and bring home box after box labeled Sewing Room. I would be sitting on the sofa with my foot propped up and Mr. SH would come past me carrying these boxes upstairs. Box after box after box.

Of course, I can’t really climb the stairs so I have no idea what’s in those boxes. When I finally hobbled upstairs to my sewing room, I almost cried. Not from joy, either. Four large boxes each containing various collections of supplies, scraps, and stash fabrics. More Hoader than Wabi Sabi.

Here’s a ‘before’ picture of all of this stuff from my old house. All of this was in those boxes and now needs a place. 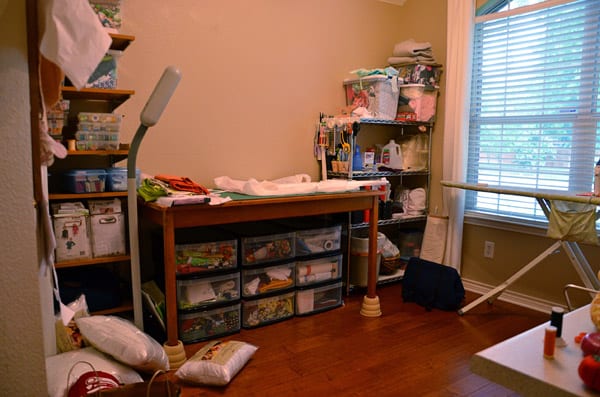 Not to mention all of the backyard stuff. And garage stuff. And attic stuff. Stuff, stuff, stuff. And all I can do is hobble around and wonder where are we going to put all of this stuff.

Thanks to my intrepid husband, he managed to find places (or tossed) most of the stuff that kept piling up in the garage until it looked like this. And we now park both cars in the garage!

My foot was feeling much better so we made not one, not two, not three…but five different trips to Ikea in order to try to tame my sewing room {one day I went twice!}. Remember, the sewing room doesn’t have any closets so everything is out in the open.

But the trips to Ikea started paying off. I originally wanted to put two of Ikea’s Pax cabinets into the two recessed spaces on either side of the window. They were the right size, but wouldn’t work because Ikea doesn’t make a door for that size cabinet. Go figure!

This whole time I’m thinking that all of my sewing stuff that is in storage will fit into two (approximately) 34″ x 15″ x 93″ cabinets tucked into two wall niches. Wrong-o!

Of course there will be shelves and doors (hooray!) And, I will (in time) weed out that tangled mess of fabric which screams horder.

Notice the missing door on the left. It was damaged so we had to load it back up and go to Ikea again to get a replacement. I think this became trip number seven or eight. 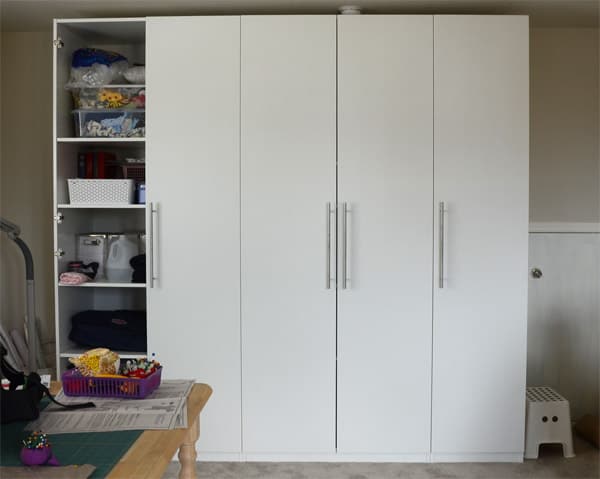 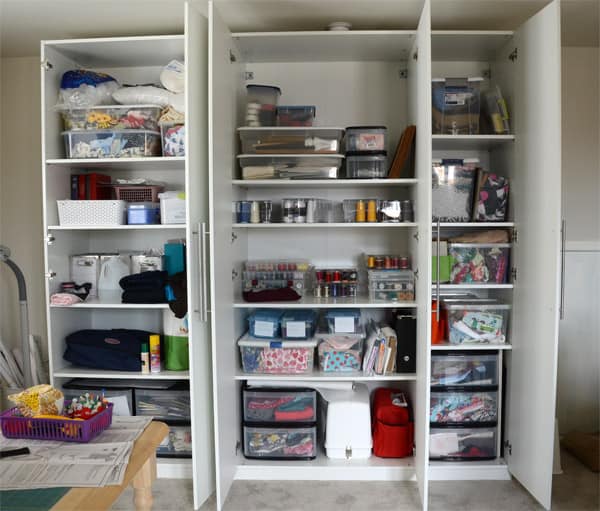 Like I said, I’m getting there. Just adding the cabinets and getting supplies off the floor is huge. Later on I will want to look at setting up a new cutting table and possibly something else for my machines.

In the meantime, getting there in the garage and sewing room is huge!