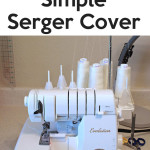 When I first purchased my serger I covered it with a flimsy plastic cover that came with the machine. Knowing that this would never hold up, I have since made a simple serger cover from scraps. Enjoy this Serger Cover Tutorial.

Here’s what the plastic cover looks like. It doesn’t go on easily and I usually end up leaving my serger uncovered.

This is not a great option.

There is also the dilemma of my ever-growing stash of sewing scraps. I think that these scraps mate and then reproduce. I know I don’t have that many scraps.

To solve both problems I took out a stack of scraps and pieced them together to make a serger cover.

Here’s what I did:

In order to turn the above pile of randomly cut scraps into something useful, I cut them into various squares and rectangles and just started stitching them together with a 1/4″ seam until I had created something that measured approximately 16″ wide x 34″ high.

Once the cover had reached the correct size, I cut a single piece of fabric for the back that was approximately 17″ x 35″. Lastly, I found a scrap of Warm and Natural Batting and made a quilt sandwich. I pinned all three layers together. (affiliate)

By this point in the day it is about 107° outside (I’m serious – this is Austin!) and my sewing studio is starting to warm up. So, instead of getting really detailed in my quilting, I went with something simple. I pulled out my Wave Edge Ruler and started marking wavy lines with a water soluble marker. I made the lines approximately 1″ apart.

Then, I just started stitching down the curvy lines. I didn’t do such a great job because it was getting really hot in my sewing studio.

Once I was done quilting, I trimmed off the excess and squared up my edges so the cover wouldn’t be all wonky. Since I didn’t want to sew on wet fabric, I chose to wait until I was finished to remove the water soluble markings.

I did this by measuring all four sides and adding 10″ to this number. I cut several strips of fabric that were 2.75″ wide. I needed about 108″ of binding so I pieced these strips together by laying two strips together and stitching across at a 45° angle.

Next step:  This is so obvious, but trim the excess from connecting the strips.

When you’ve gotten back to the starting point, fold back the raw edges and stitch down. Fold over the clean edge to the right side and press with a steam iron. Pin in place.

You will need four ties in order to keep your serger cover from slipping off when you aren’t there. Cut 2 pieces of fabric 1.5″ x 36″. With Right Sides Together, stitch lengthwise using a 1/4″ seam and turn with something like a chopstick or the Dritz Loop Turner. (affiliate)

Press with steam and then cut them in quarters so you have four ties. On each of the four sides of the serger cover, pin the ties inside the folded edge of the binding 6.5″ from the top/bottom edges. (affiliate)

I wanted my binding to stay in place so I used a product I love called Sewline Fabric Glue Pen. Because there is no drying time needed I was able to stitch down the binding using a running zigzag stitch. (affiliate)

Remember the pesky blue lines, I removed them by spritzing with water. Another option would be to toss your cover into the washer if you are really picky – which, clearly, I am not.

That’s all there is to it. It’s cute, it’s useful, and my scrap pile is now a little bit smaller.