A couple of weeks ago Mr. SH and I took another trip to Newfoundland Canada. If you’re new to this blog you may not know that my daughter B and her family currently live there near the Bonavista Peninsula close to the Bonavista Discovery Trail which is rich in history and natural beauty.

This year our focus was more centered on our two year old granddaughter and spending time with family. However, we did get to see some pretty amazing things and I even visited a wonderful quilt shop in St. Johns.

I thought I’d start with this amazing natural port. It’s called Quidi Vidi (pronounced kiddy-viddy). Quidi Vidi is a quaint neighborhood that was historically a fishing village. It is found in St. John’s which is the largest city in Newfoundland. 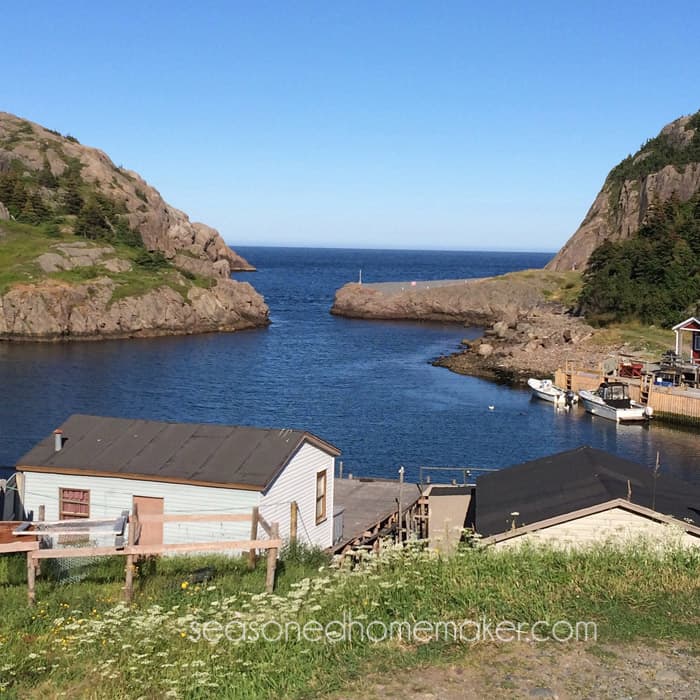 One of the things that really struck me on this trip was the sea and how the people who live here can’t help but be people of the sea. Notice this Quidi Vidi neighborhood. Do you see a road? Nope, the only way to your house is by boat or a long hike. What’s not in the photo is a small boat launch on the left ~ otherwise you’d have to enter from the harbor in the above photo. 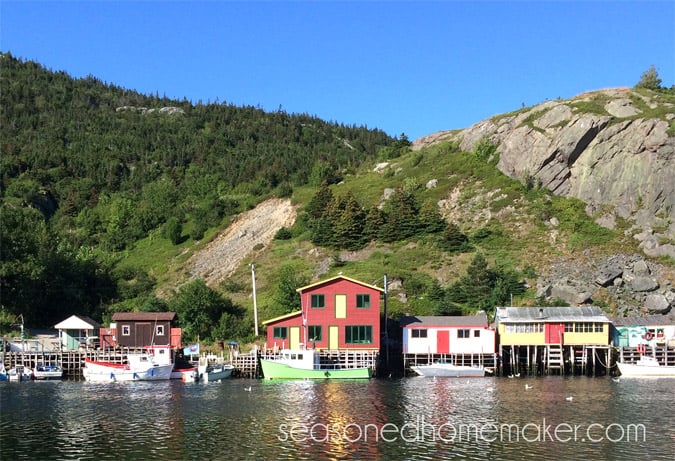 The day after we arrived we decided to revisit the Town of Trinity on the Bonavista Peninsula. Trinity is one of those truly authentic historic towns that whisks you back to the past the minute you arrive. Quaint shops, a historic church, and one of the best natural harbors you’ll ever see. 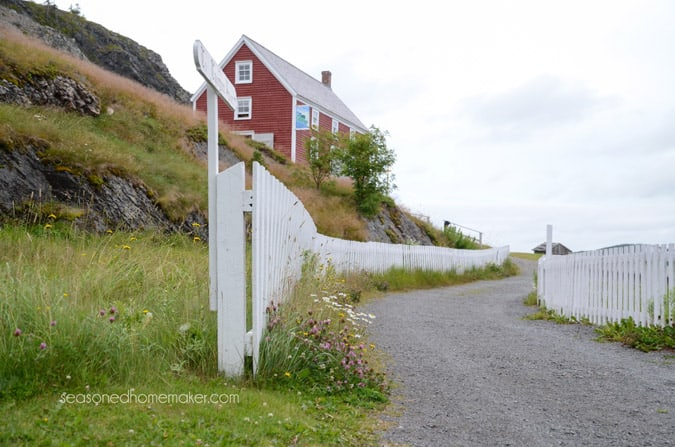 Newfoundland is kind of famous for its fog and rain. You can see the fog starting to roll into Trinity harbor. The day we were there was wet, foggy, and drizzly. This photo shows the size of the harbor which historically was significant to the fishing industry. 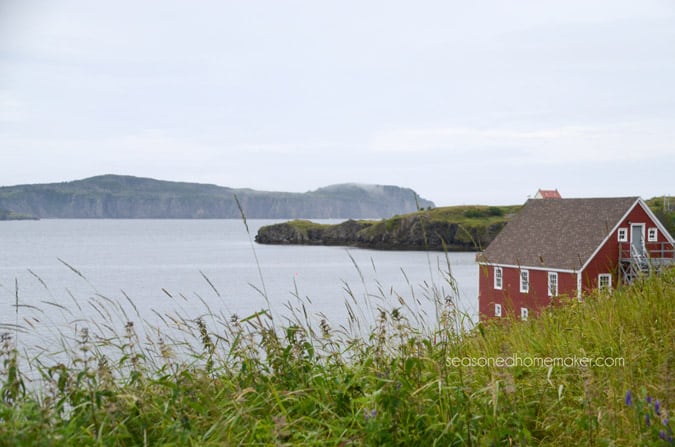 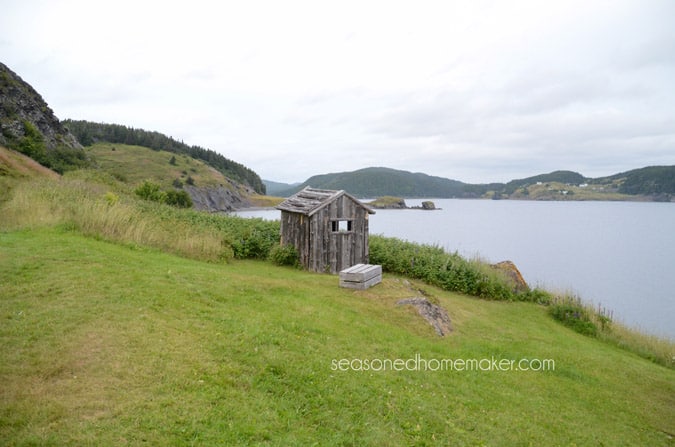 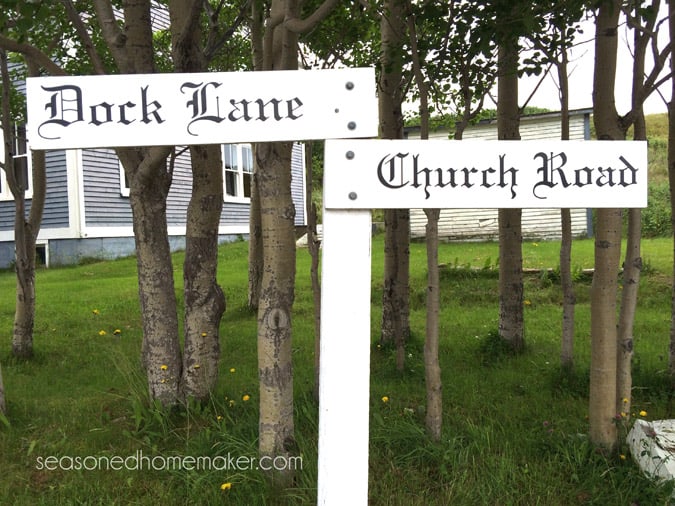 There are two national parks in Newfoundland. We were able to visit Terra Nova National Park. Imagine a park where the sea meets the forest with the ability to experience two eco systems side by side. 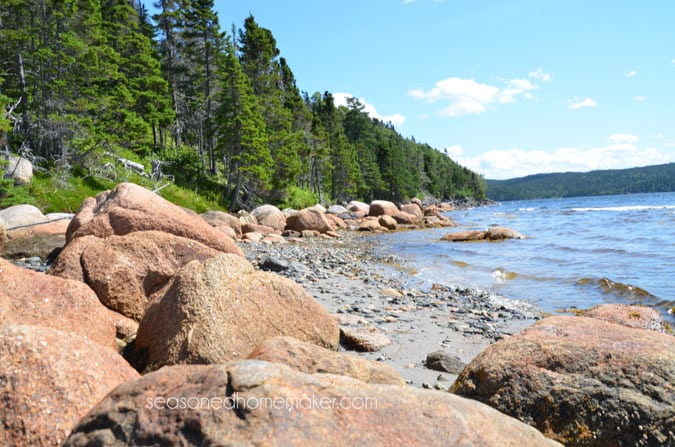 There were even beaches, but there was no way this Texas gal was stepping into that freezing water. I dipped a hand in and that was enough. 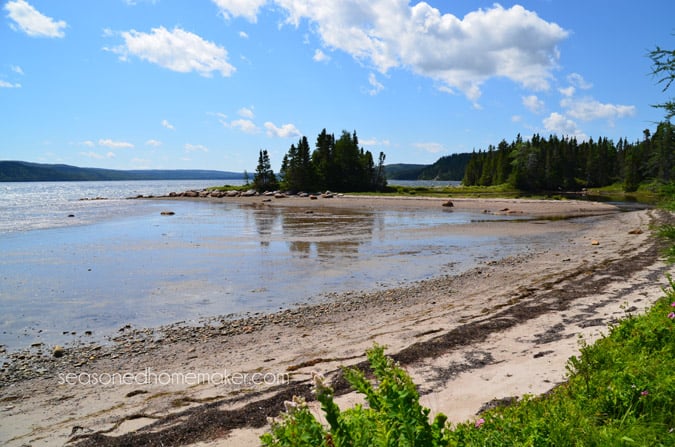 One of the things you notice when you are in Newfoundland is the fresh air. Fresh air like you’ve never experienced before. And not only in the national park….fresh, fresh air everywhere. 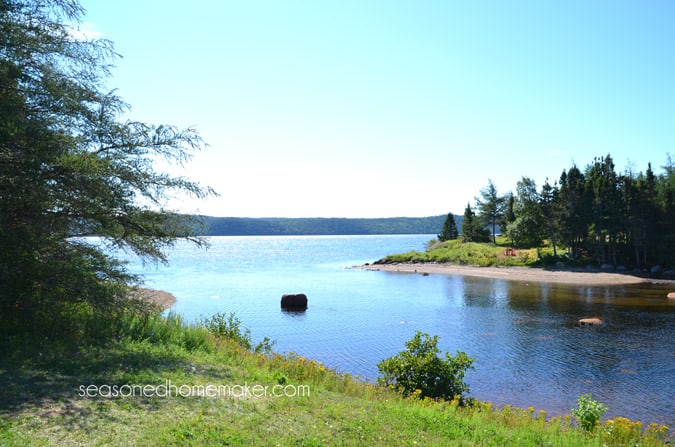 One of the places we visited both last year and this year was Random Island. It’s a large island full of remote villages and scattered homes. I imagine that previous generations who lived here were somewhat isolated. Even driving around the island we felt this isolation.

However, there are many scenic spots and I can imagine having a home here that faces the sea but backs up to the forest. An outdoor’s man dream. 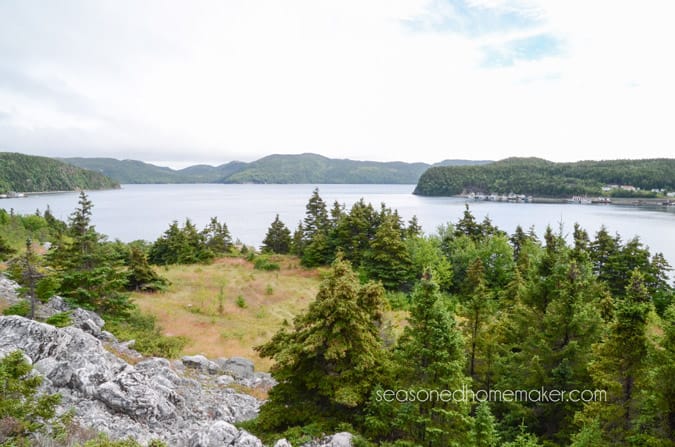 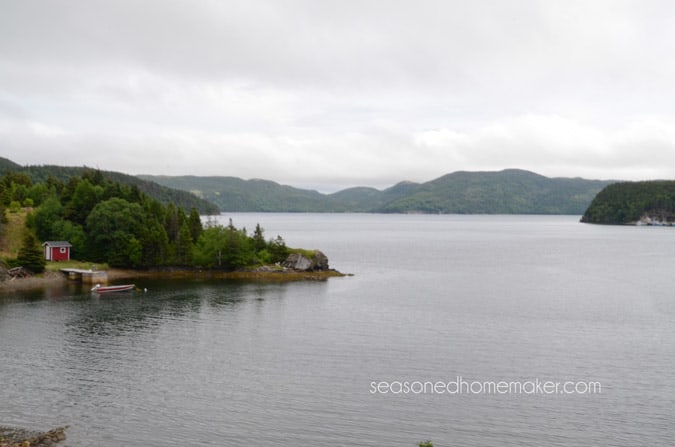 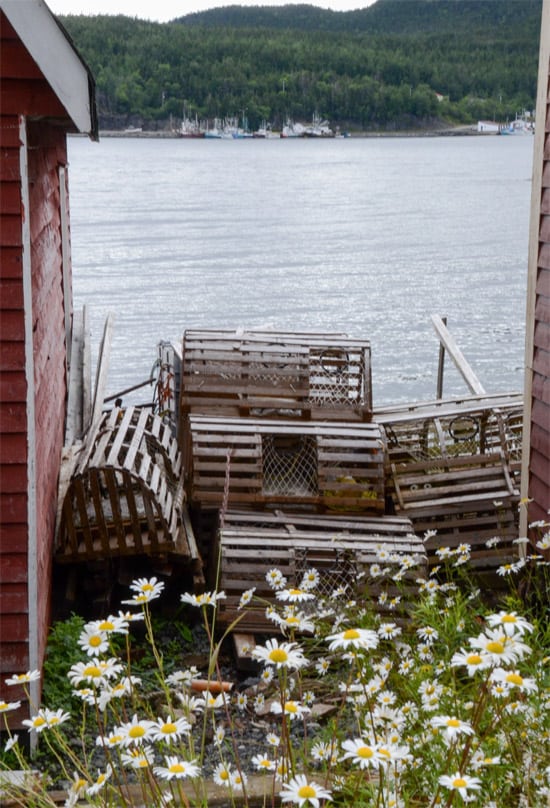 There were these signs everywhere in Newfoundland, a reminder that moose are prevalent and can create a hazard on the road. My daughter has even had them come close to her yard. There are approximately 125,000 moose that share the island with 500,000 people. With the fog being an issue and an abundance of moose, the odds are pretty good that you may encounter one of them sooner or later.

Newfoundlanders are not so worried about the moose because a little further north in Labrador polar bears are the big nuisance. It’s really all a matter of perspective, I suppose. 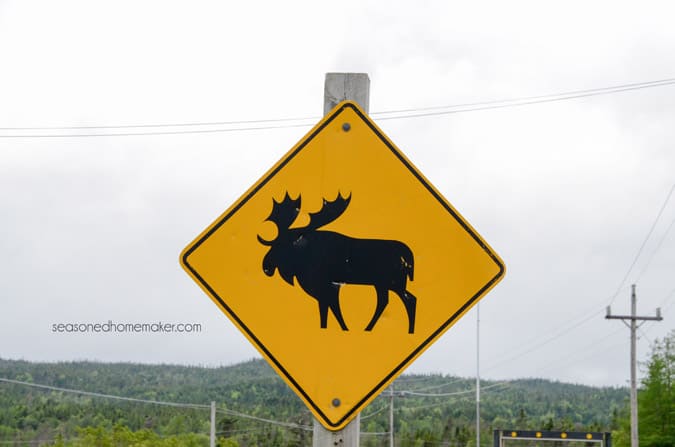 Well, no vacation would be complete without me visiting a sewing store or quilt shop. When we were in St. John’s I found this wonderful shop called Fiber Lilly where I met the lovely Meghan. Fiber Lilly is a combination sewing store, quilt shop, and yarn barn. You can enjoy quilting classes, learn to sew, or take a knitting class. 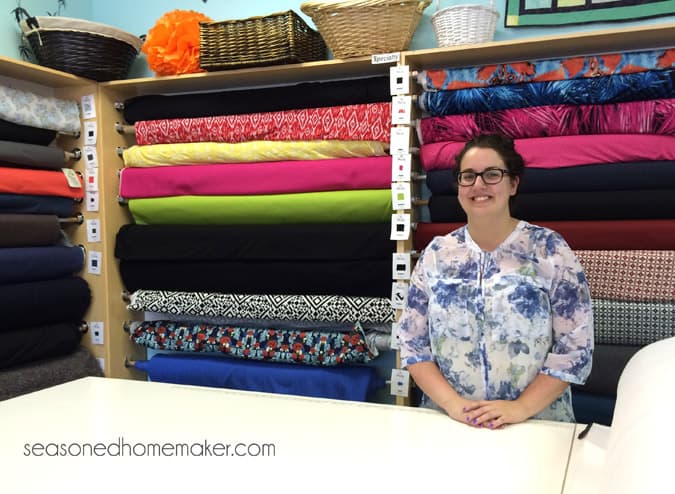 While chatting with Meghan I asked about quilting in Newfoundland and particularly modern quilting. Meghan said traditional quilts are what most people prefer but younger women are leaning more towards modern design. She even had a couple of quilts on display that were definitely modern in design.

If you’re interested in following the sewing/quilting scene in Newfoundland (and who isn’t?), Meghan shared with me their Facebook Page which is huge. Considering the distance between communities, I’m certain that this has become the digital version of a quilt guild. You are all welcome to join the page and follow along with fellow sewists, albeit in Newfoundland.

Places we wish we could’ve seen ~ including France

On the map below I’ve tried to put it in perspective. The red circled area on the eastern side of the island is where we were staying.

However, we’ve yet to visit the western side of the island where Gros Morne National Park is located. The scenery is even more majestic and you can see fjords. If we end up going next year we are thinking we might like to visit Nova Scotia first and then take the ferry over to Newfoundland. We would be on the western side of the island and then could drive around to visit our family.

Did you know that France is right off the coast of Newfoundland. Yep, at the bottom of the map is an archipelago called Saint-Pierre et Miquelon. I’ve circled it for you. If you visit these islands you are officially in France and you will need to show your passport to enter, understand a little French, use an adapter to plug in your phone or other devices, and exchange currency for Euros. It is the only remaining remnant of France in the New World. 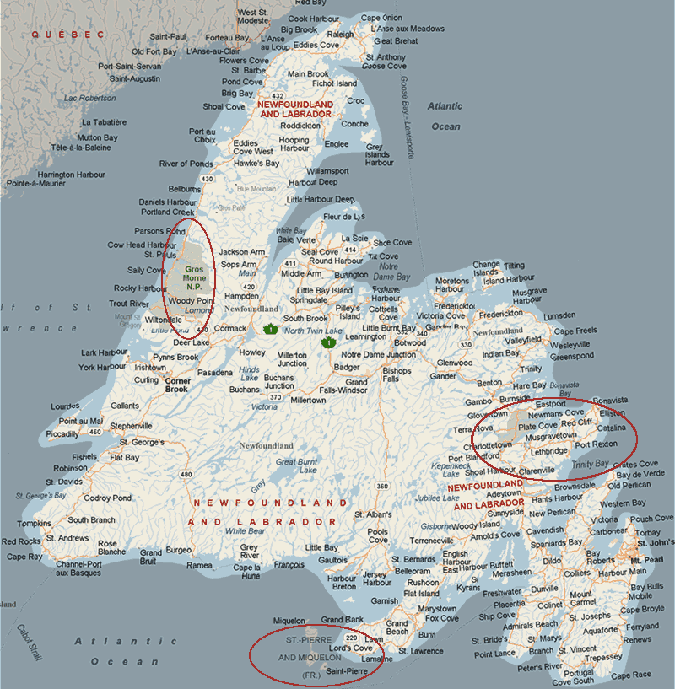 After two visits to Newfoundland I am starting to know this island a little better. Remote, yet accessible. Uncrowded and unbelievably clean. Virtually untouched natural beauty as far as the eye can see. Abundance of wildlife (moose, arctic birds, and whales). Ancient and historic.

Oh me, Oh my ~ Here’s a taste of Newfoundland music by Great Big Sea (famous for their Newfoundland music). You’ll understand it a little better if you listen to it twice. Can you hear the Celtic influence? Of course using a bodhrán (Celtic drum) really adds to this feel.