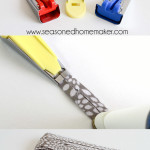 On Monday I wrote about a top I had made which used bias tape. Today I am going to show you how I made my bias tape. On Friday I will be back with instructions for attaching bias tape.

What is Bias Tape?

Just a quick review. Bias tape is used to finish raw edges on sewing projects. It’s cut on the bias which means it has a little stretch, making it perfect for sewing around curves such as necklines or armholes.

If you’ve ever been to a sewing store you’ve likely seen bias tape in packages that look like the ones in the image below. It comes in a variety of widths, styles, and solid colors. The two most common found in sewing stores are Single Fold and Double Fold Bias Tapes.

What is Single Fold Bias Tape?

Single Fold bias tape is a single wide bias strip that is perfect for securing the raw edge on a lightweight project such as an apron. Because it’s Single Fold, it doesn’t add any weight to the garment or project.

This bias tape is also great when you’re finishing an edge where the bias tape doesn’t show from the outside of the project. An example of this would be a neckline or armhole. Both are on curves and would need something cut on the bias to go around the curves.

When I was making and selling aprons on Etsy (before I converted them to patterns) I went through several thousand yards of Wright’s Single Fold solid-colored bias tape.

Purchased bias tape works fine until you want your bias tape to match your sewing project. In order to get the bias tape to be a perfect match you’ll have to make it from scratch.

What is Double Fold Bias Tape

It can still be used for hems and necklines, but will have a thicker appearance that stands out and adds weight to a project.

How to Make Bias Tape

What happens when you have a project but there is no bias tape to purchase that matches? You make your own!

Notice how each of these bias tape makers have different openings. The opening size determines how wide you will cut your bias strips. I used the one with the yellow plastic handle for my shirt. To make my bias tape, I cut 1″ wide strips.

Here’s how I make bias tape. I had a piece of leftover fabric from my top that was 22″ x 28″. I spray starched to give the fabric body and ironed out the wrinkles.

Step 2: Fold the Fabric on the Bias

I took the bottom right corner and folded it up towards the top edge of my fabric. This created a bias fold line.

Then I folded the top right corner down to the edge of the bias fold.

This gave me a new bias fold line that now is my cutting edge. Then I rotated my fabric until the folded bias edge lined up with a cutting line on my {really filthy and needs to be replaced} cutting mat.

Step 3: Trim away the fold

I realigned my cut edge with a cutting line on the mat and began cutting 1″ strips. I chose 1″ because that is the size that fits best with my 1/2″ bias maker.

Now I will need to sew all of these strips together before putting them through the bias tape maker. Nothing could be easier. There are a couple of ways to do this. I am going to show you one that I think is very fast. The other way requires a more exact matching. In my opinion that method takes too long. However, my method does waste a little fabric.

Place the bias strips right sides together at a right angle with the top left corner of one edge matching the bottom right corner.

Pin the pieces together and line up the raw edge with the 5/8″ seam guide on your sewing machine. The guide will keep your seam straight and at a 45-degree angle.

Trim away the excess fabric.

Press the seams open and it is ready to put into the bias tape maker.

Step 6: How to use the bias tape maker

Cut a 45-degree angle on one end and slide the fabric into the bias tape maker.

Pull the fabric through the bias tape make, pressing as you go. Notice the almost non-existent seam.

I find the process of making bias tape simple and rewarding. How about you?