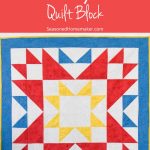 Inside: Have You Heard of the Blueberry Pie Quilt Block?

Have You Heard of the Blueberry Pie Quilt Block? When I sketched out this block a couple of years ago I had no idea if it was a traditional block or even had a name. I thought I might have created a new quilt block.

Of course, I’m not that naive, I just had no idea what the block should be called. So, for almost two years I called it the Expanding Star Quilt Block.

What to call this block

As I did a little more research I noticed that this block has a lot in common with the Blueberry Pie quilt block and the Memory Star quilt block.

Technically, it’s not a true Blueberry Pie block, but it has some elements of the block. It’s really more of a double Memory Star quilt block with a twist.

For now, this quilt is simply a fun block that I upsized for dramatic effect. And, I think I’m going to still call it the Expanding Star Quilt Block until someone comes along and tells me if this block has a name.

Here are some things to know about the (newly named) Expanding Star Quilt Block.

It’s just a lot of squares and half square triangles. Did you get that? It’s not that hard – which explains why I could come up with it in the first place and then execute the design.

It’s 8 squares across and 8 squares down. Each square is either a full square or a half square triangle (HST). Notice the center star (yellow) is really just a 4-patch design. And the red outer star is the same.

The first twist happens on the four corners where I added in HST’s and then turned them to face each other. The second twist occurs with the blue HST’s. And this is what gives it that expanding star feel.

You can see this in the EQ8 design I put together when working on the original design. Notice that it’s just squares and HST’s. (Ignore the yellow inner border. On the actual quilt I decided to eliminate it and instead made the binding yellow.)

One thing I really like about this project is the size. Because it’s oversized I was able to focus on accuracy when matching points. This was an important lesson and became extremely valuable when piecing my next quilt.

For now there is no quilt pattern available. Maybe one day I’ll get around to this, but for now I’m sharing it with the world and hoping someone knows if this block has a historic name. (or did I create something new?)

In the meantime, I encourage you to experiment with design. I used my Quilter’s Planner to sketch and record this design. I like knowing this because it becomes a record of my quilting journey.

And let me know if you’ve ever seen this block before and/or know its true name. I know it’s not a Blueberry Pie block or a double Memory Star block. I’m happy to call it by its real name. If it doesn’t have one, then I’m going with the Expanding Star Quilt Block.