I am writing this post from the Edge of Tomorrow ~ practically. At this moment I am writing from Newfoundland ~ a place that was never on my radar until my daughter B and her family were transferred here a few months ago. The only other time I took a slight notice was when I saw the movie, The Shipping News ~ which I highly recommend. 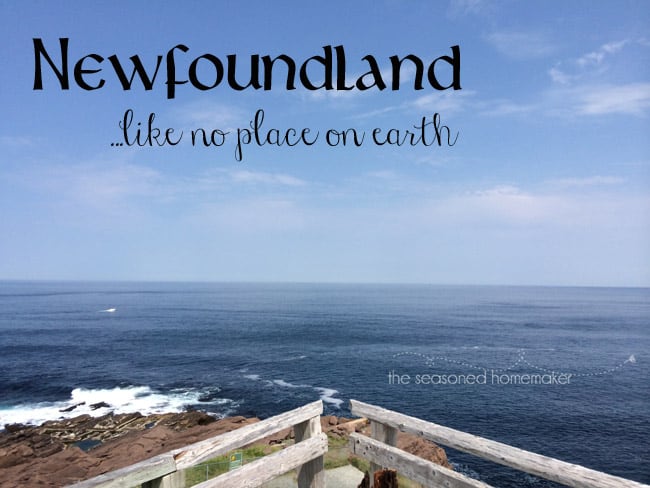 To get here was a feat of phenomenal proportions. The cost for an airline ticket from Austin to St. John’s is pretty steep; however, we had some credit card points which made it possible. Still getting here wasn’t easy. Notice that Newfoundland is an island (translation: cha-ching). 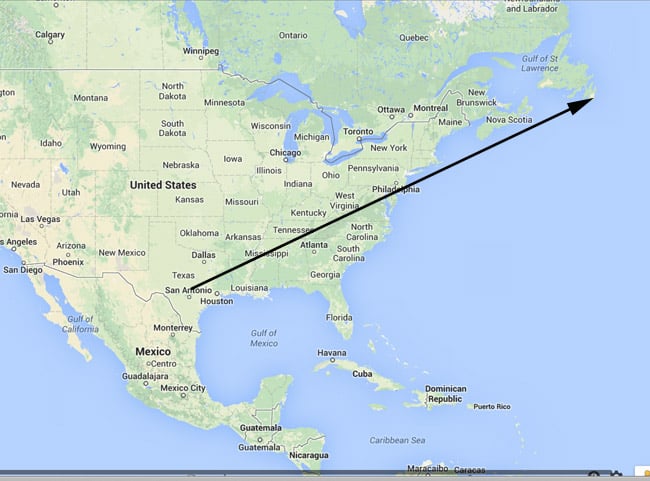 To get from my house in Austin, Texas to Clarenville, Newfoundland was a three day trip. Clarenville is about halfway between St. John’s (where we landed) and Gander. On this map it is about 20 miles south of Terra Nova National Park.

Here’s how it shakes out. 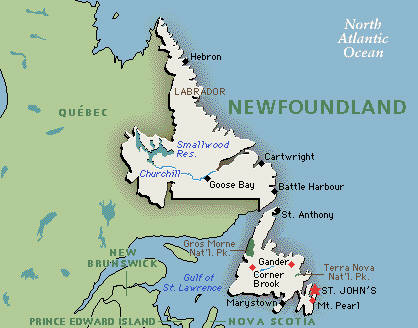 Day One: Drive to Dallas because we couldn’t afford two airline tickets from Austin. It was cheaper to stay overnight at a hotel in the DFW complex. Plus, only one connection. This will become important as you read more.

Day Two: Fly from Dallas to Newark, then while in Newark, try to find something gluten-free in the Newark airport. 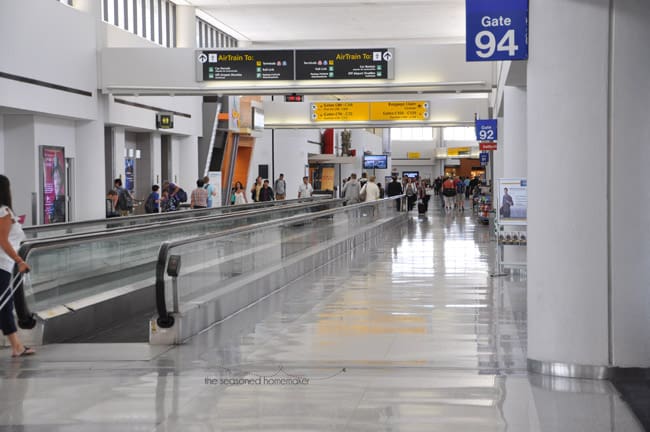 We had a four hour layover so we sat and stared at Manhattan. So close….

There is only one daily flight from a US airport to St. John’s, Newfoundland and if you miss it you have to wait until the next day. I later found out that occasionally the plane has to turn around and go back to Newark if the wind is too strong to land in Newfoundland (and it kind of is). Fortunately, we made it. After customs, luggage, and a rental car we headed to our hotel. Had we connected through Toronto or another large Canadian city it would’ve been a different story – but the cost was way, way more than we could afford.

Day Three: Drive 2.5 hours down the T.C.H. (TransCanadian Highway) from St. John’s to Clarenville where my daughter and her family live. This was a beautiful drive and I felt a little like I was traveling through Middle Earth ~ except we had to watch closely for moose ~ which are a real problem here. There were (of course) heavy winds, sunshine, rain, dense fog, more rain, then sunshine. Totally worth the drive.

Once we finally arrived we were greeting by this view from my daughter’s back deck. Pretty much everyone in Clarenville has a similar view. Ah! 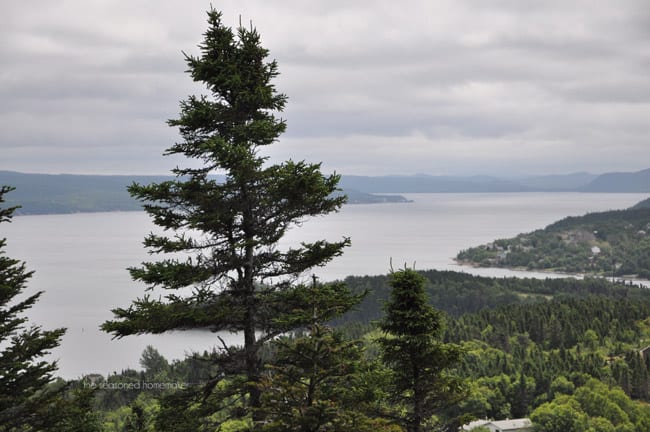 Newfoundland is a beautiful island and I hope many of you will get the opportunity to see this pristine place. Of course, our real reason for going is to see our daughter and her family. My sweet little granddaughter is about to have her first birthday and this is what motivated us to make this trip.

After doing a little research I found out that we might be able to see some pretty amazing natural features such as icebergs, whales, and puffins. This is the Newfoundland trifecta. We were told that July is pretty late for icebergs; whales don’t usually come close to land; and puffin sitings are rare. Oh, well we were there to really see family and anything else would be a bonus.

Our first full day we all decided to take a hike up Bare Mountain in Clarenville {with Baby Girl in the Ergo carrier}. We would be able to see all around the area. It was warm and sunny. Perfect for a short hike. You can see that Clarenville is remote and at the end of an inlet.

Pretty much every Newfoundland town or village is on some sort of cove, inlet, or natural harbor. The island has a long history with the sea. Seeing Clarenville from this height put it all in perspective. 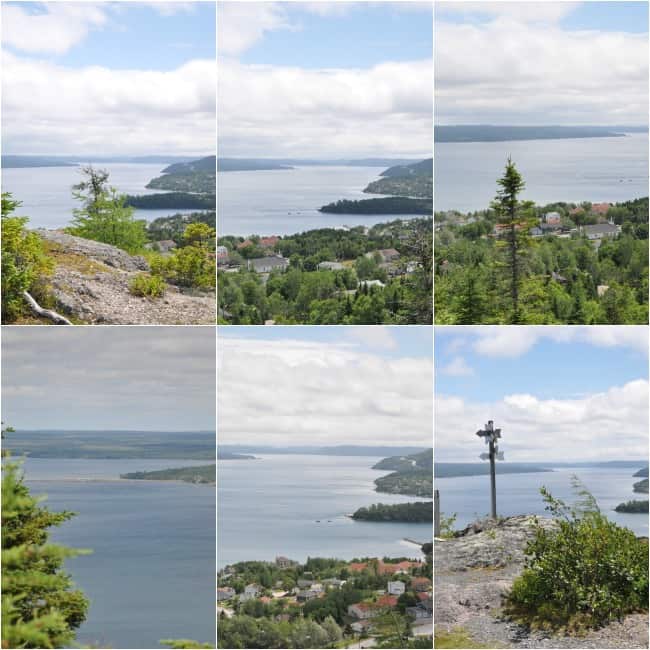 The next day my B and Mr. B suggested we drive to an area on the Bonavista peninsula called Trinity. It is an old, preserved village. What a great place – lots of preserved buildings and history everywhere. 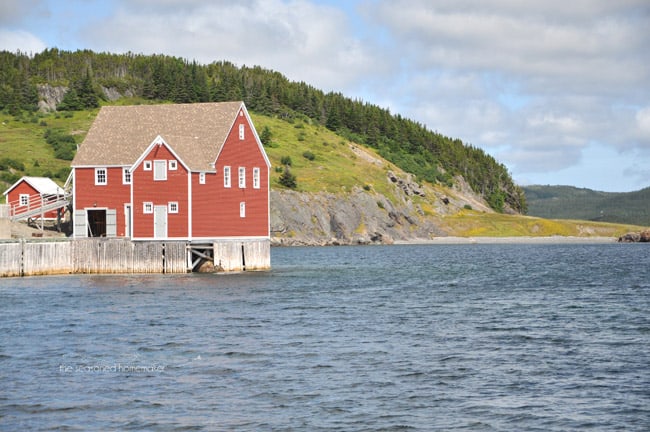 I was completely struck by the graveyard at the Anglican Church. The headstones were all blown over. This tells you everything about Newfoundland and it’s long, harsh winters. And the wind.

This cemetery is a few steps from an inlet. I have such admiration for people who would stake their claim in this climate. 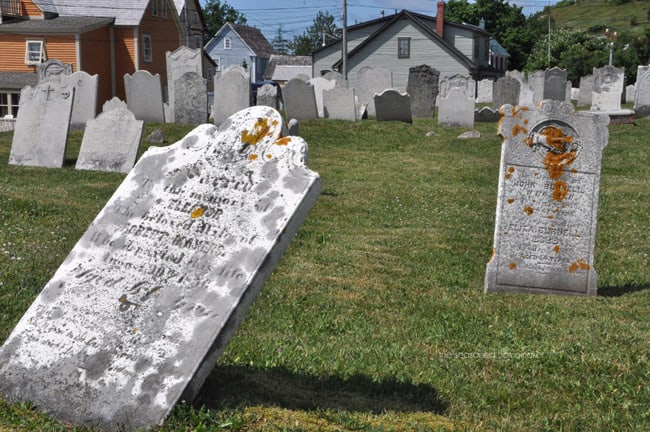 After visiting Trinity we decided to hike the Skerwink Trail which is near Port Rexton and Trinity. It is considered one of the top 35 trails in North America and Europe. While I was on the trail I had no idea. After getting off the trail I understood. Click on the link and you will understand, too.

The first part of the trail is a pleasant hike with lots of birds, trees, and flowers. 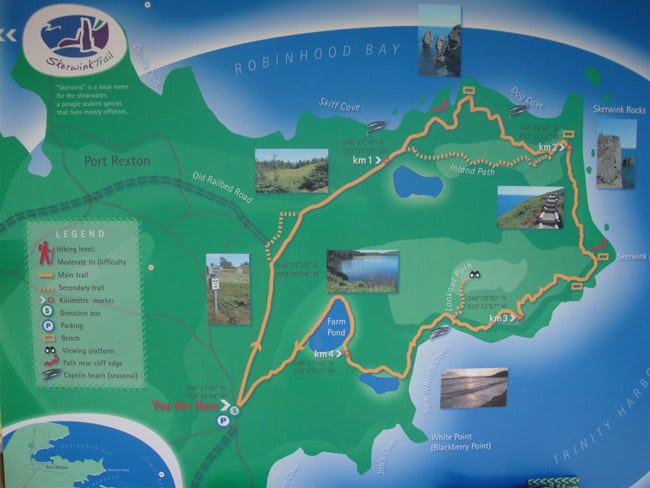 In Newfoundland you really never know what is around the next corner, cove, or mountain. I’m telling you that there is so much beauty it is almost more that I could take in. It looks tame right now, but I assure you those working lighthouses dotting the coast serve a real purpose and aren’t pretty tourist attractions 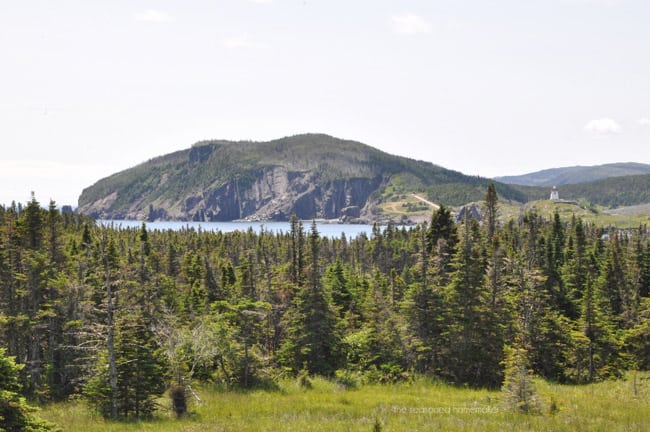 For such an amazingly beautiful place we were struck by how uncrowded everything was. We would pass a few people on the trail, but really we had the place to ourselves. Like I said earlier – The Edge of Tomorrow.

Once we got to the coastal part of the trail we started seeing all sorts of rock formations. 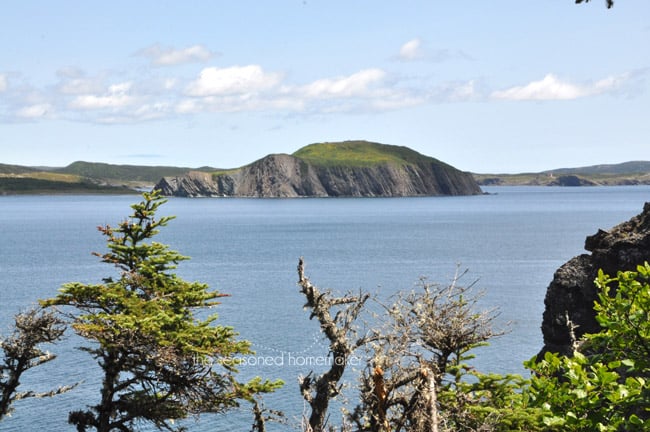 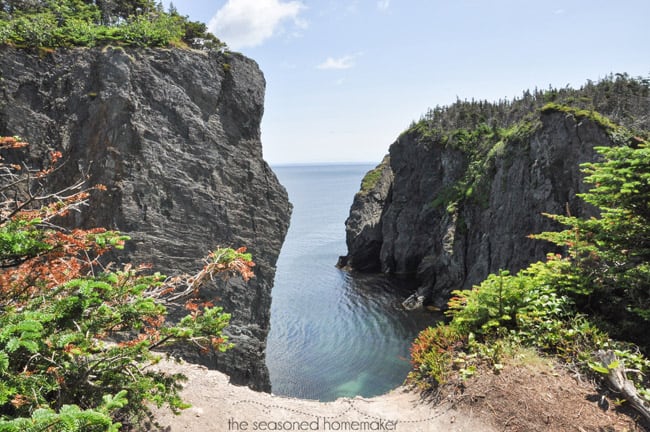 Notice the small village in the background. These little communities were all over the coastline. 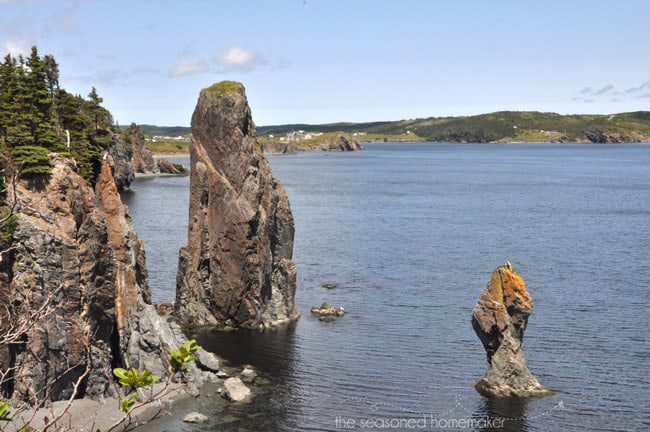 You can see from our photos that the sky is almost clear and that made the water this breath-taking deep blue color. I know our pictures don’t even come close to portraying this.

The icebergs pass along the Newfoundland coast along something called the Labrador Currents. Sometimes they don’t get anywhere near this close to land. We were so fortunate to have seen this.

They look kind of dinky in this pictures ~ think in terms of a house or two sitting out in the water. 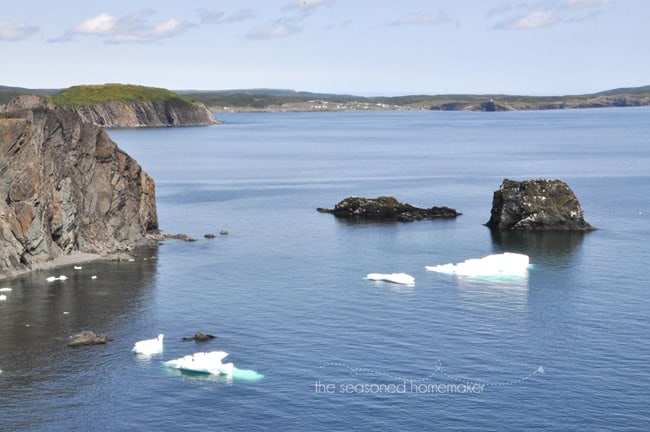 Here’s a better picture of the scale. Notice the humpback whale in the photo in relation to the iceberg. 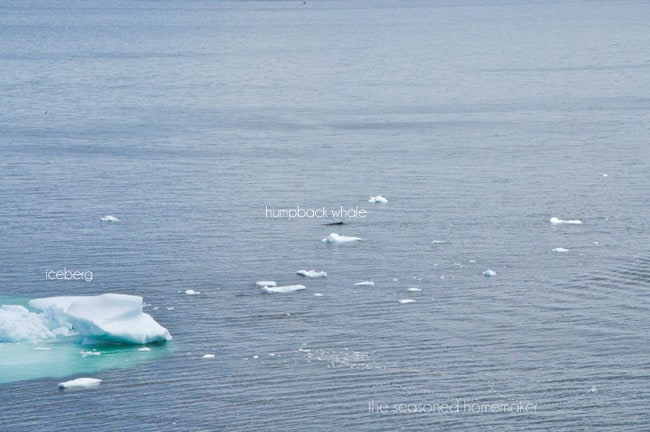 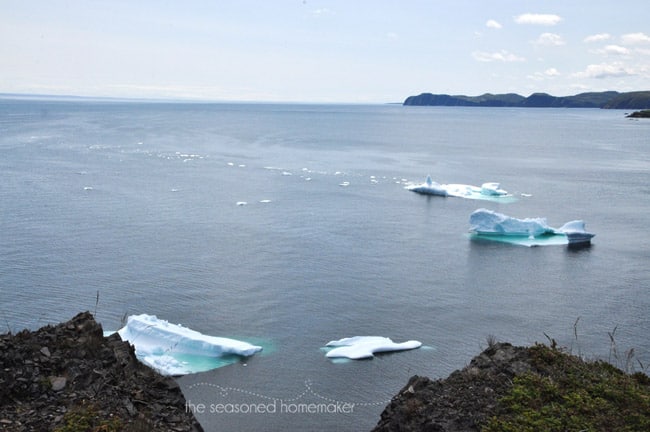 I tell you, it was like I had died and gone to Heaven. To see icebergs and whales together. We will just call that a great, big check on my Bucket List. 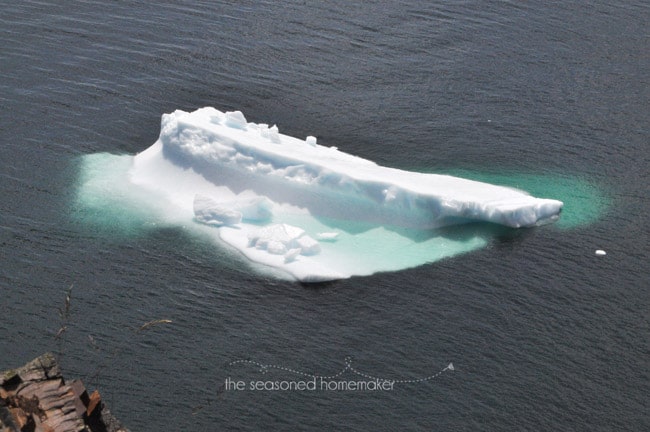 Another place we thought we’d visit was the town of Bonavista where John Cabot is recognized for landing in 1497. Whether or not this is the exact spot where Cabot landed, it is certain that he and his men spent some time in the area. Whenever I’m in an area of great historical significance I want to see it.

You can see that Bonavista is pretty close to Clarenville and all of those little towns and villages like Newmans Cove look like something from a movie. If you look on the map you can see Trinity East ~ which is where the Skerwink Trail is located. Now look to the point of the peninsula and see Cape Bonavista ~ because it juts out into the Atlantic it is a lot more rugged and weathered. It wasn’t too hard to imagine huge waves crashing against these rocks. 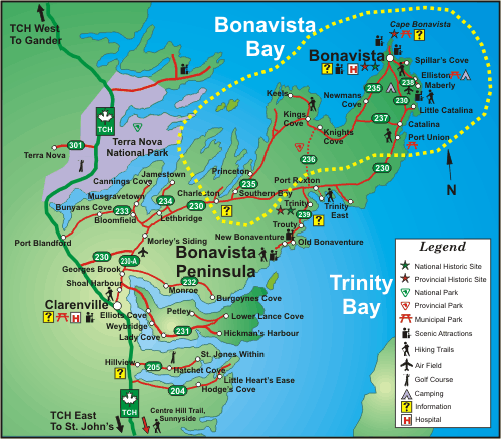 Again, no crowds ~ just a few people scattered about checking it out. 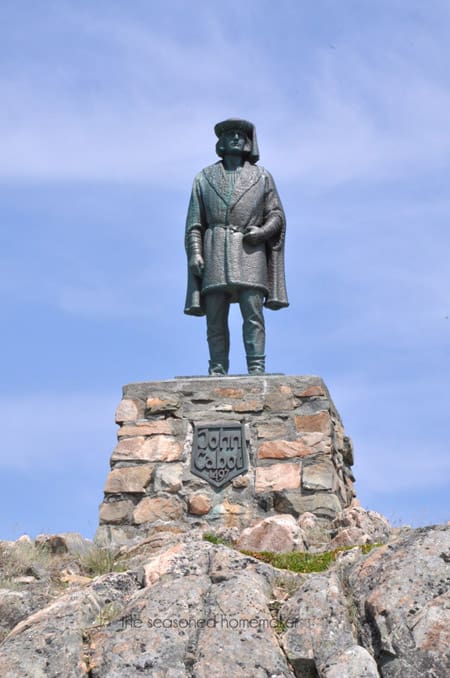 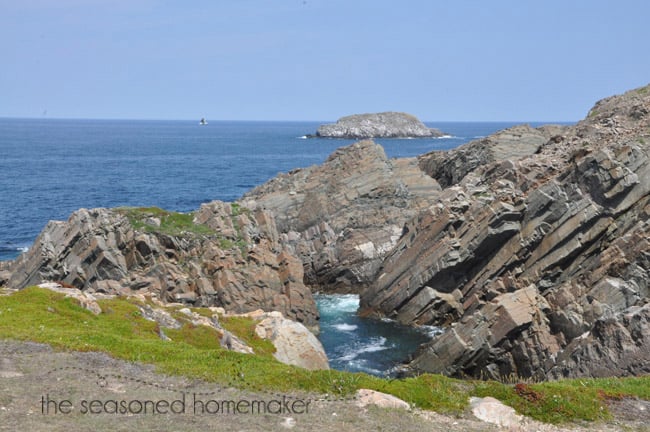 It’s pretty isolated out here compared to the town of Trinity. There aren’t very many trees and you can see how barren it is. 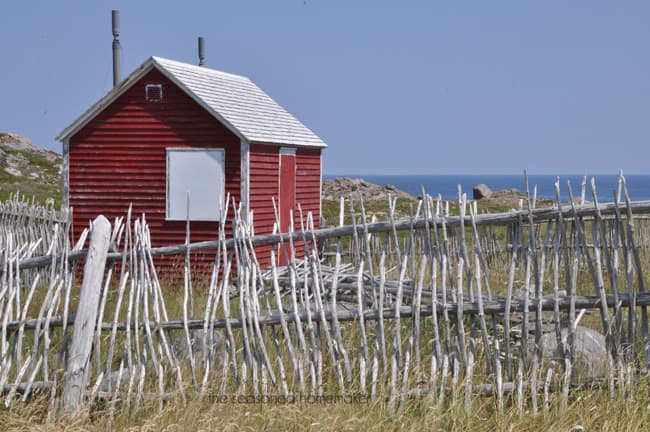 The historic (and still operating) lighthouse on the end of the peninsula makes perfect sense when you are standing there. 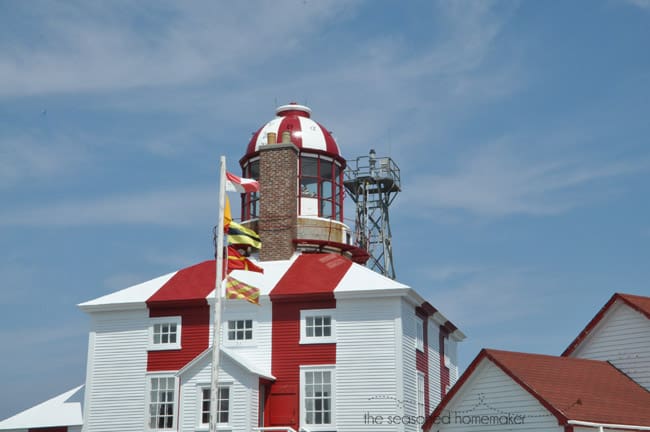 When we were in Bonavista we kept seeing signs for the Puffin Festival. Since it was just down the road, we headed to Elliston. The Puffin Festival had ended the day before, but that didn’t mean the puffins were gone.

This was such a cool place ~ there was an actual beach (with people down there getting into the freezing cold Atlantic) and some cliffs. We parked and started walking out onto one of the cliffs where we saw a few people. We hiked to the end of point and then across the point was another cliff with puffins and seagulls. The cliffs were pretty far apart, but I had my binoculars which allowed me to watch their activity. As an amateur bird watcher, I have to say, this was a pretty big deal. Like, when am I ever going to see a puffin again? {you will have to squint to see the birds)

Our last day in Newfoundland had us heading back to St. John’s. We wanted to see a few of the local sites before catching a plane home the next day. St. John’s is the largest city in Newfoundland and has lots of historical significance. It has this hidden harbor with a signal tower at the top. No one is getting in or out of the port without being seen. This photo was taken from the top of Signal Hill. 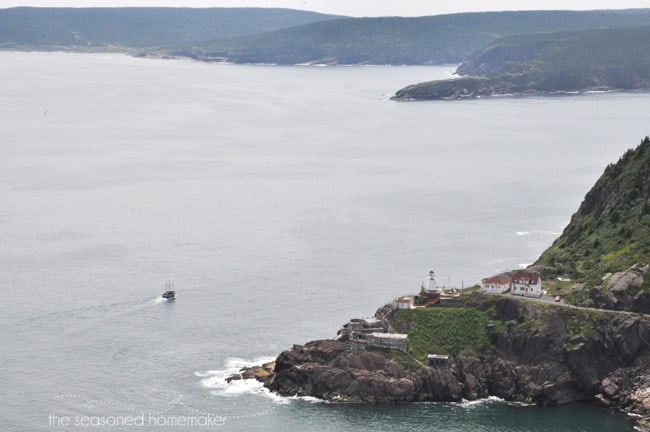 Signal Hill is at the top of the inlet and this became extremely important during WWII. They were able to see anything approaching their harbor and they were also able to send radio signals back to England. I had never considered this before, but Newfoundland was vital in keeping the Nazi’s from launching an invasion in N. America. 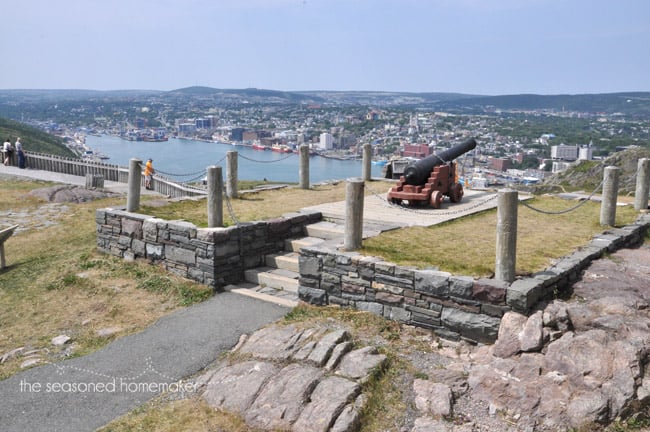 We didn’t want to leave Newfoundland without making one last stop ~ the Eastern most point in N. America. The next stop is England. 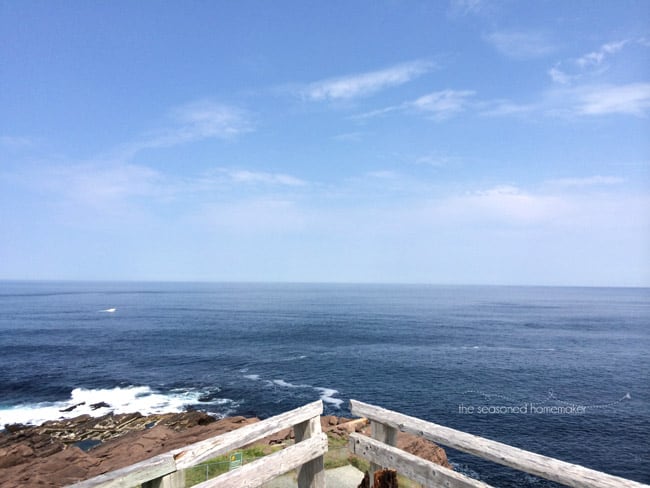 St. John’s (and most of Newfoundland) has the most colorful houses. In every village or town on the Bonavista Peninsula houses were all painted in these bright colors. I scanned this postcard to show you what I’m talking about. St. John’s is historically a fishing city. When sea captains returned from a voyage they were faced with rows and rows of identical Victorian row houses. In order to easily find their homes after returning from sea they were painted these vibrant colors. 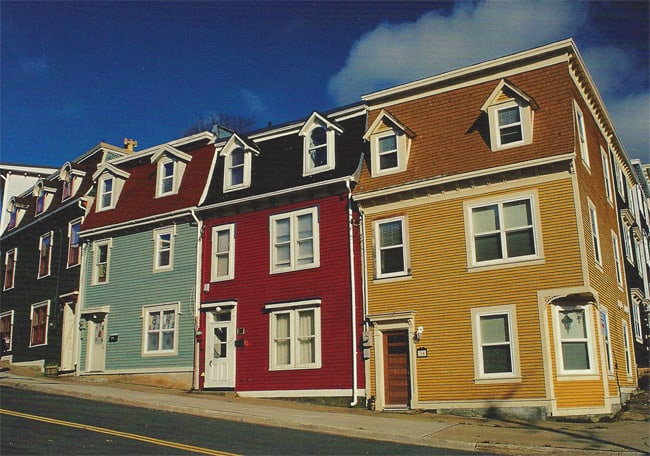 Before heading off to our hotel to get ready for the flight(s) home we stopped in downtown St. John’s for some traditional Newfoundland food. I had to try Poutine. A perfect meal to end our trip.

There is so much more I can say about this amazing place. Friendly people, a unique dialect, and beauty as far as the eye could see.

{Psst. I’m back home in Texas…and it only took two days to get home}

Update: A reader from Quebec sent these links to share.